It’s been awhile since I’ve done a cartoon roundup, so I thought this would be a good time for one.  I have always been a fan of the single-panel cartoon as an art form in its ability to capture a wide variety of topics from the silly to the serious, and I happened upon some really good ones memorializing Robin Williams –

A nice look back at some of his more well-known contributions, with the poignant double meaning of the phrase, “we laughed ’til we cried.”

… and a slightly more cynical observation. 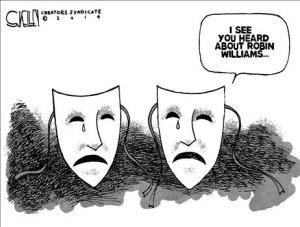 I saw many versions of the iconic comedy / tragedy masks, but most of them were a take on the tragedy of his depression behind the mask of the funny guy.  First of all, I don’t think his condition (or anyone’s condition, really) is that simple.  Second, that’s such a trite, insensitive analysis to reach for.  If you’re going to take the time to draw a memorial cartoon, either show me something in a new light or make it simple and sweet.  Like this cartoon above – simple and sweet.

I was ten years old when Aladdin was released and immediately became the most culturally significant Disney movie of ALL TIME …. at least, to my ten-year-old self it seemed that way.  Robin Williams defined a part of my childhood and I didn’t even know it until years later.  And that’s why I love this one – it speaks so well to those of us who first encountered him as the Genie and who will forever remember him in that role.

In closing, to switch gears for a bit, here is a heart-warming video of Robin Williams meeting Koko, the gorilla that was able to communicate in sign language.  And here are, in Ms. Perry’s words, “thoughtful and gracious posts” on suicide and mental illness.

Thoughts and prayers for both his soul and his family that he left behind.